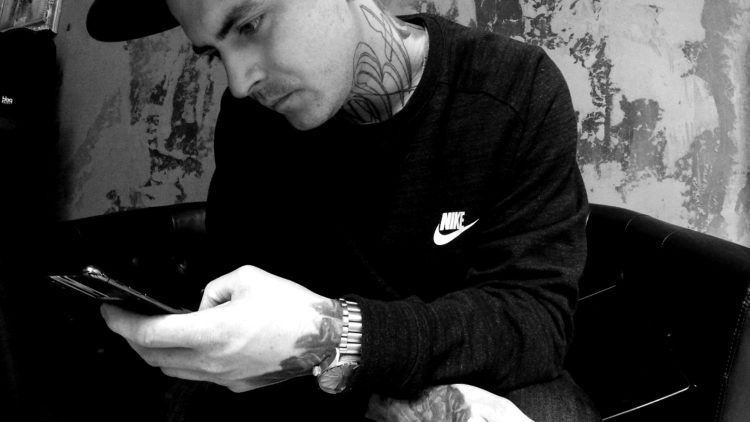 Igor is one of the best. In August 2018 he won together with our guest tattoo artist Levgen Knysh at the Empire state tattoo convention in New York the first place at “Best of show“.

Profile:
Home: Czech
Tattoostyle: Graffiti realisim
Before being a tattoo artist, worked as : Artist
Started tattooing with: 25 years
Since when do you tattoo? 2014.
What don’t you tattoo: everything except graffiti realisim
Favorite food: Italien food
Describe yourself: creativ

Our guest tattoo artists visit us regularly, so they can also realize larger projects for you. Everyone has his own style. If you are not sure which tattoo artist is the right one for you, make an appointment with Britta. She will be happy to answer all your questions. Also for all further information or appointments please contact her.

At his first guest spot in our studio, on a rainy evening, it was 11:30 p.m., some people call it a night, I sat with Igor in front of the fireplace and asked him some questions about his work, his art and his way until here.

Our conversation began with the question:”Igor, why don’t you give yourself a brief description?”He laughed and said, “You can begin with: He is such a nice guy” You have to know, Igor is not the type of person who likes to be the center of attention. Therefore, he revised his statement quite fast. Igor: “No, I don’t know… Creative?”I left it like this.

On the subject of how he came to tattooing at all and when the fascination for graffiti started, he was much more happy to tell.Born in a small village in Czechoslovakia, he discovered his love for graffiti as a child. With a smile on his face, he told me how he used to go to the train station and admire the sprayed trains. Igor “There were so many colourful trains! All full of graffiti”. Later in school, he took another art course in addition to regular art lessons and took his first steps towards his own mural painting. Then followed an abrupt end, as far as drawing was concerned. Igor emphasizes that he only recently got everything working out, because in the past either drawing was done, or graffiti was brought to the wall but never both in the same period.

At the age of 15, he put the pens aside and started spraying. Since he had finished school, he knew that he wanted to earn his money with art, but this was not so easy. He started to work in a skateshop. Igor “You know, it’s a simple job and I had my head free for my graffiti and the creativity in it”.He quickly got better and better, so he painted walls in discotheques and other buildings for money.During this time Igor also got to know a tattoo artist with whom he became friends. Igor: “One day I went to him and wanted a very personal tattoo”.He also told me that his buddy said, Igor could tattoo the motif on his inner calf or something. The tattoo artist was so convinced of Igor’s talent that he actually made him tattoo himself.Igor: “He went out and came back a few minutes later”. And when the tattoo artist entered the room again, he was so excited about the straight lines that Igor had drawn on his own body that he advised him to also start tattooing. Igor: “I took a hygiene course, safety comes first.”

Then followed a typical tattoo training, little sleep, much drawing. Then he tattooed himself, tattooed good friends, tattooed friends and then at some point even customers.He had the idea to get his own graffiti on skin very early and even today he tattoos the graffiti on the body of his customers, which he sprayed on a wall earlier.Igor: “I do what I enjoy and that twice”.After this conversation I felt very much confirmed in how we select our guest tattoo artists. Igor is an incredible artist who loves what he does and knew what he wanted to do with his life at a young age.

Thank you Igor for the great conversation!

Come and visit us again!

Tattoos, meetings, aftercare and controls are ONLY done on appointment.
Please always call us before your visit:

To make an appointment, simply fill out the following form and tell us everything we need to know.